How I Store Hops

If you like to brew beers with a lot of hop aroma, hop storage is crucial. Keeping them in the freezer is good enough to slow down alpha acid loss to a crawl. (Alpha acids are the main bittering compounds in hops.) However, if you don't take measures to limit oxidation, your hops are going to lose a lot of their fresh aromatic compounds, and—God forbid—may pick up cheesy or catty aromas.

There are two basic approaches to avoiding oxidation: removing the air, or replacing it with something else. To remove air, one would typically use a home vacuum sealer like a Foodsaver. Homebrewers, ever the penny-pinchers, have also used automotive brake bleeder pumps for the same purpose. However, neither of these methods can pull a very strong vacuum. For that, you'd need a chamber vacuum machine, which tend to cost thousands of dollars. 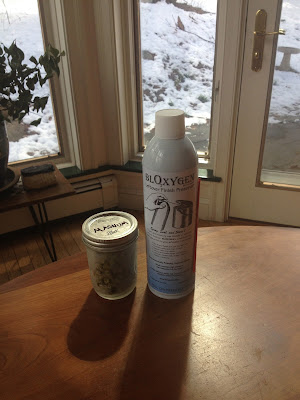 Instead, you can flush the hop container with an inert gas, like nitrogen, argon, or carbon dioxide. If you keg your beer, you already have plenty of CO2 sitting around. I don't keg, so I got myself a bottle of Bloxygen, which is pure argon. It's designed to preserve half-empty cans of wood finish, but has also become popular amongst wine drinkers for preserving opened bottles. It's $13 and should be good for about 150 uses.

After I open a new bag of hops, I put the leftovers into half-pint mason jars, open the lid just enough to slip the Bloxygen tube inside, and give it a one-second burst of argon. The argon, being heavier than air, will push the air out of the jar and protect the hops from oxidation. Then I seal the jar, throw it in the freezer, and call it a day. If you already have a vacuum sealer, you can also double up on protection and vac seal the jar after flushing.

Just be warned: once you start buying hops by the pound, you're going to need a lot of freezer space!
Posted by Lee Morgan at 11:53 AM