What's in a Beer?

The four ingredients in beer, as defined by Germany's Reinheitsgebot (beer purity law), are water, yeast, hops, and malted barley. Simple enough. What the Reinheitsgebot doesn't tell you is that there are dozens of kinds of malt, hundreds of varieties of hops, and thousands of strains of brewer's yeast. In what follows, I will try to explain what distinguishes the different yeast, malt, and hops that a brewer can utilize in crafting a beer. I'll leave water alone, since discussing water chemistry would require a whole post in itself, and is probably less interesting to most people.

Modern brewers have access to a huge variety of malts. All of them are produced from the same substance: raw, unmalted barley—which, to be honest, is pretty bland. However, by manipulating the way the barley is dried and cured, the maltster can produce a spectrum of bold flavors, such as toasted bread, nuts, caramel, dried fruit, smoke, coffee, and chocolate. On a more practical level, the malting process is necessary in order to produce the enzymes in base malts (alpha- and beta-amylase) that will convert the starches in the barley into sugars that the yeast can ferment. Virtually no modern breweries malt their own barley, but specialty maltsters like Briess produce very high quality products. 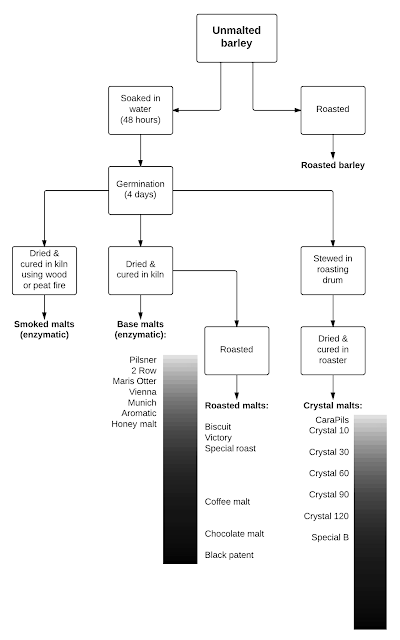 Unlike barley, the processing that hops undergo after they're picked is only meant to preserve the natural flavor of the hops, not to add any flavors. The variety of flavor that hops impart to beer is a result of their natural chemical composition. The flavor contributions of hops can be roughly divided into two categories: bitterness and hop aroma. Bitterness comes from the hop resins, while hop aroma resides in the hops' essential oils. The alpha and beta acids that compose the hop resins are neither bitter nor soluble in their natural state. Brewers transform the alpha acids into isomerized alpha acids by boiling (desirable), while beta acids become bitter through oxidation (undesirable). Different hop varieties provide distinct flavors because of differing levels of the various hop resins and oils. European hops tend to be fairly mild, while some American, Australian, and New Zealand hops provide intense floral and fruity aromatics. Brewers add hops at different points in the brewing and fermentation process in order to manipulate the level and quality of bitterness and hop aroma that is present in the finished beer. 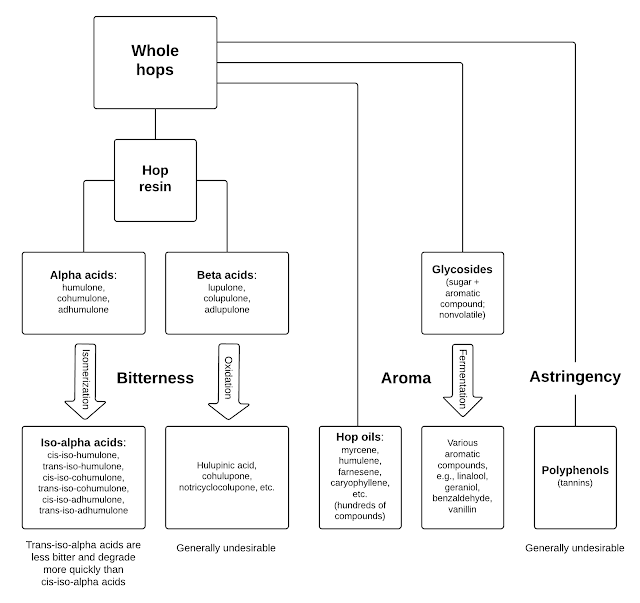 Yeast are what turn beer from a bitter, sugary liquid into the alcoholic beverage that we know. The type of yeast the brewer uses has a massive impact on the final product, because different strains produce different aromatic byproducts during fermentation, and different strains yield different levels of residual sweetness, or levels of attenuation. A highly attenuative yeast will leave very little residual sugar in the beer, resulting in a dry, crisp beverage, while a less attenuative yeast will produce a beer that is sweeter and more full-bodied. Yeast also vary in how quickly they flocculate, or clump together, which results in the yeast falling out of solution. Highly flocculant yeast are prized for producing clear beer in a short period of time, without filtration. Modern brewers have access to hundreds of yeast strains through yeast labs like White Labs and Wyeast. 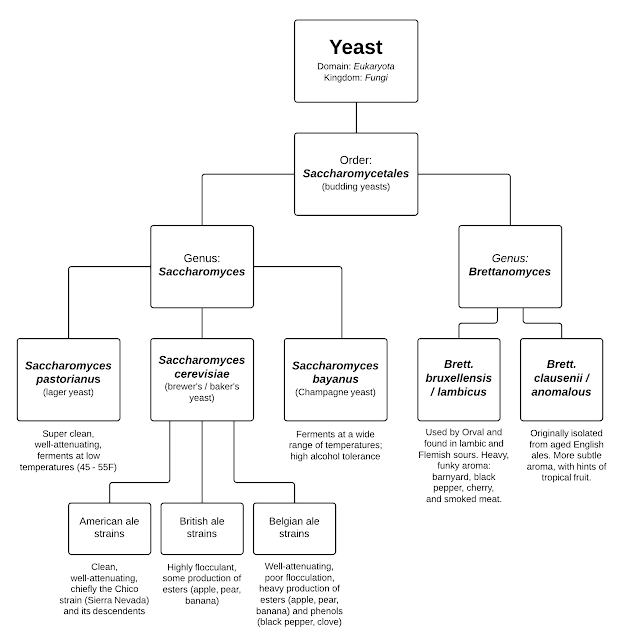 What? The Renheitsgebot doesn't say anything about bacteria! However, lactic acid bacteria are essential for producing the delicious beverages known as sour beers. Styles of sour beer include: lambic, Berliner weisse, and Flemish sour ales. Sour beers usually contain a combination of lactic acid bacteria, the yeast Brettanomyces, and regular brewer's yeast. Brettanomyces can produce acetic acid in the presence of oxygen, but this is usually undesirable, so most acidity in beer comes from bacteria. Many strains of these bacteria are inhibited by hops, so sour beers are only lightly hopped. (Except lambic, made with large quantities of aged hops, which have lost most of their resins and oils.) Pediococcus works slowly (months to years) but can produce more acid than most lactobacillus strains. 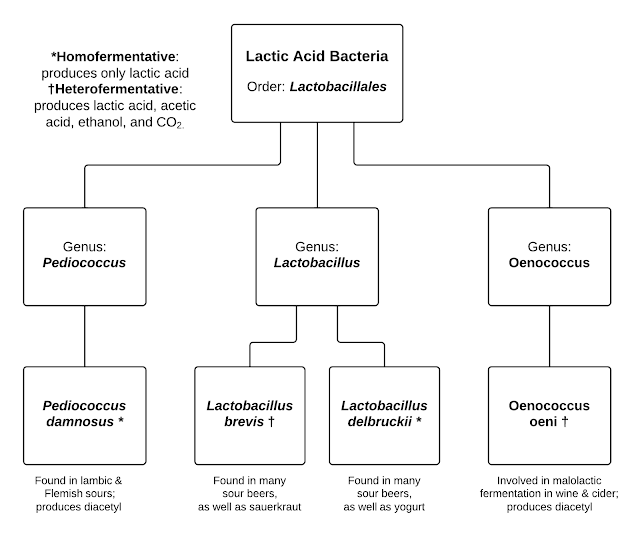