A recent trip to a tea shop made me realize that I no longer have a firm grasp on all of the distinctions between tea processing methods, due to my focus on coffee. Obviously this is unacceptable.

I will limit my discussion here to the five most common types of tea, leaving aside such rarities as yellow tea. I will also avoid discussion of non-tea 'tea', i.e., steeped plant matter that is often called tea but not made from Camellia sinensis (e.g., herbal blends, rooibos, honeybush, yerba mate). The types of tea I'll discuss are: black, green, oolong, and white. All four types are made from the same species of plant, which has two main varieties. Most Chinese, Taiwanese, and Japanese teas are made from the variety Camellia sinensis sinensis, which has a low yield but a smooth, sweet flavor. Most Indian and Ceylon (Sri Lankan) teas are made from Camellia sinensis assamica, or a hybrid of the two varieties. Assamica is higher yielding and stronger in flavor.

Black tea has the longest tradition of consumption in the western world. The major producers of black tea are India (Assam, Darjeeling, Nilgiri), Sri Lanka (Ceylon), and China (Keemun, Yunnan, Lapsang Souchong). Black tea processing consists of four stages. After picking, the fresh tea leaves are left out in the sun to dry (though not completely), a process known as withering which lasts 8-24 hours. Then the leaves are sent through heavy metal rollers which bruise the leaves, rupturing the cell walls of the tea and exposing its innards to the air. The bruised leaves are left until fully oxidized. The leaves are then fired in a heated drying chamber, which removes the remaining moisture. Ready to drink.

Green tea production and consumption is centered in China and Japan. Some famous Chinese green teas include Long Jin (Dragon Well), Huang Shan Mao Feng, and Bi Luo Chun. Sencha dominates Japanese tea production. Green tea differs from black tea in that green tea is unoxidized. After picking, the leaves are immediately exposed to heat in order to deactivate oxidative enzymes. In China, this is typically accomplished through pan frying or baking, while the Japanese use steam. After de-enzyming, the leaves are rolled into the desired shape, often by hand. The shape of a green tea leaf may identify the variety of tea; Bi Luo Chun, for instance, is rolled into a distinctive spiral. Finally, the shaped leaves are fired to remove the remaining moisture.

Oolong's flavor lies between green and black tea, because oolongs are partially oxidized, with levels of oxidation ranging from 8%-85%. Oolong is mainly produced in China and Taiwan (AKA Formosa). Some famous dark oolongs include Da Hong Pao (Red Robe) and Dongfang Meiren (Oriental Beauty). Some famous green oolongs include Tieguanyin (Iron Goddess) and Dongding. Oolong processing is quite involved. Oolong leaves are allowed to grow larger and more mature before picking, which makes for slower oxidation, allowing the processor a greater degree of control. After picking, the leaves are withered for no more than a few hours. They are then carefully and gently bruised through hand-tossing in baskets. The bruised leaves are left until the desired level of oxidation is achieved, then pan-fried to halt the oxidation process. The leaves are rolled into shape and then fired. Many oolongs are then roasted over low heat for hours or even days, which adds roast flavor, further reduces moisture and improves the tea's longevity.

White tea is produced mainly in China. There are three traditional Chinese varieties: Baihao Yinzhen (Silver Needle), Bai Mudan (White Peony), and Shou Mei, listed here in order of price and prestige. White tea is processed in much the same way that natural processed coffee is: it's picked and then left in the sun until dry (mechanical driers are also sometimes used). A modicum of oxidation occurs during drying. The result is a mellow, sweet, and nutty cup of tea.


Pu-erh is a unique form of tea produced in the Chinese province of Yunnan from assamica plants. Pu-erh comes in two forms: raw and ripe. Raw pu-erh is essentially a green tea that is sun-dried rather than kilned after rolling, resulting in a modicum of oxidation. It tends to taste pretty rough when fresh, so it's usually aged for long periods of time before consumption, which slowly darkens the tea and smooths out the flavor, as well as adding complex, earthy aromas. Ripe pu-erh is a more recent invention, intended to mimic the flavor of aged raw pu-erh. Ripe pu-erh is made from raw pu-erh which is moistened and piled in heaps, then monitored and turned regularly for 6 - 12 months. The damp, warm environment increases microbial activity. Raw and ripe pu-erh are available in both loose leaf and compressed form; pressed pu-erh ages more gracefully. 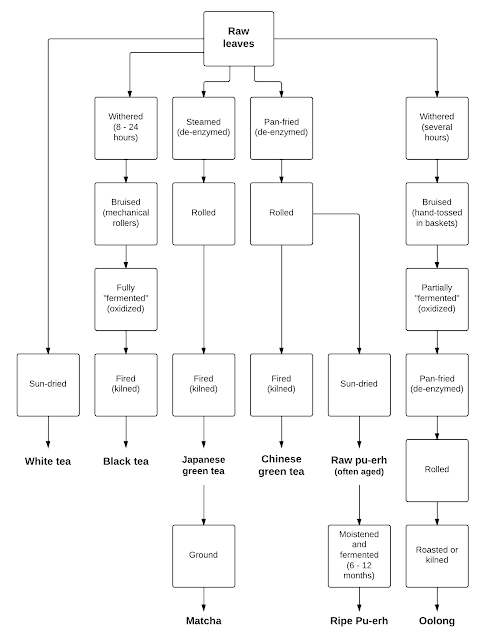 Different types of tea require different brewing techniques. Though all tea should be steeped in hot water, the temperature of the water, the ratio of tea to water, and the length of the steep all vary by the type of tea. To a certain extent brewing practices are culture-dependent—in China, for example, even black tea is generally steeped for a shorter period of time with more tea (compared to Western practice)—so it's worth experimenting with tea/water ratios and steep times, but these traditional methods are a good starting point.

Black tea should be steeped in water of at least 200˚ for about four minutes, though you may want to steep longer if you wish to add milk. About 2 tsp of tea per 8 oz of water should be used; use more if the tea leaves are particularly large, less if they're broken or small. You can steep black tea up to two times.

Because the processing of pu-erh breaks down most of its tannins, it's near impossible to over-steep. However, it is generally prepared gongfu (see below). In any case, it should be given a quick rinse with hot water before brewing, which removes any impurities on the tea.

Oolong tea can be brewed in the same manner as green tea, but traditionally brewing oolong involves a more complex protocol, known as gongfucha. Water between 180˚ and 200˚F should be used, depending on how oxidized the oolong is. The bare bones of gongfucha are as follows:

1. Pre-heat the tea equipment with hot water.
2. Fill small teapot (3-8 oz) 1/4 – 1/3 full of tea, or 5 – 8 grams / 4 oz. Traditionally, an Yixing clay pot dedicated to brewing oolong is used.
3. Rinse the tea leaves: fill the teapot halfway with hot water, then discard immediately.
4. Fill the teapot full of hot water.
5. Steep for 30 seconds. Pour into a serving vessel, then into several small cups. (This isn't the kind of thing you do alone.) 5 - 8 infusions should be performed in close succession. Increase steep time by ~10 seconds for each subsequent infusion.

Email ThisBlogThis!Share to TwitterShare to FacebookShare to Pinterest
Labels: tea